After Reforms, EU Sugar Farmers to Get $665 Million a Year in Direct Payments

Nearly a decade ago, the World Trade Organization found the European Union guilty of violating trade rules after decades of using export subsidies and a complicated domestic marketing quota system to prop up inefficient producers. 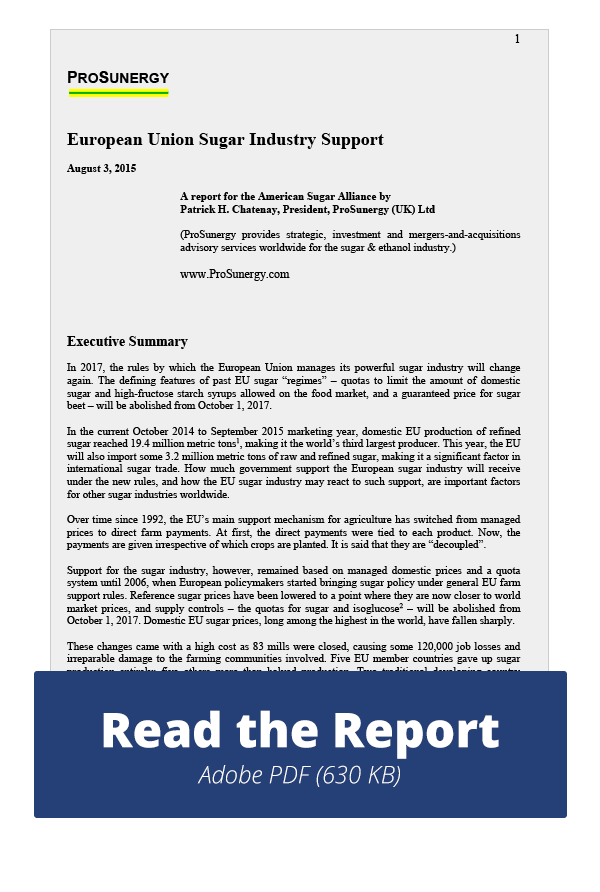 Since that ruling, the EU has implemented radical changes to its sugar policy. But will those changes help further free trade and lead to a subsidy-free system as some in the EU are claiming?

The answer is unquestionably no, according to a new paper by Patrick Chatenay, a sugar policy expert from the UK-based company ProSunergy.

Chatenay, who unveiled his work today at the 32nd International Sweetener Symposium in New Mexico, explained that the EU is simply shifting from a price management system to direct subsidy payments.

Chatenay also noted that EU farmers will continue to benefit from high tariffs that block sugar from most exporters and restrictions on genetically engineered crops.

“By 2019, estimated total annual decoupled and coupled payments directed to sugar beet and sugarcane amount to US$665 million,” he wrote, further explaining that “the EU sugar market is not, and will not be, completely open to imports.”

The continuation of subsidies is likely a result of the economic pain and sugar shortages that Europe experienced when it began reforms in 2006. After initial reductions in domestic marketing quotas and price guarantees, 83 European sugar mills closed, leading to 120,000 lost jobs.

To ease the pain, the European Union passed a $6.2 billion aid package to compensate its producers for leaving the industry, and it sent another $1.5 billion to foreign farmers in former colonies.

By October 2017, the EU will completely abolish its old domestic marketing quota system and implement the lucrative direct subsidy scheme, which is allowed by the EU’s 2014-2020 Common Agricultural Policy, Chatenay said.

“Taking into consideration forecasts that show that the EU may well return to being a significant net exporter,” he wrote, “this support can negatively affect world market prices and other exporting countries.”

Jack Roney with the American Sugar Alliance, which hosted the international sugar meeting, said that the EU situation is indicative of the challenges U.S. farmers face in the global marketplace.

“For decades, foreign sugar subsidies have created the world’s most volatile commodity market and those subsidies are rapidly increasing, ” he said. “Even when countries are supposedly reforming their systems, they are still writing big subsidy checks and continuing to distort world prices.”

While U.S. sugar farmers have some support through import tariffs and operating loans, they do not receive government subsidy checks like their EU counterparts. And Roney said that America only has a sugar policy to respond to foreign subsidization and the dumping of subsidized foreign sugar onto the world market.

“We would like for all sugar producing countries to convene at the World Trade Organization and establish a plan for eliminating all subsidies and all trade-distorting policies,” he said. “That would allow prices to reflect actual production costs, and because the U.S. is so efficient, we would thrive in a true free-trade environment.”

But Roney cautions against unilaterally disarming U.S. policy before such reforms can be made.

“A handful of critics in this country want to re-open the farm bill and leave all farmers, not just sugar growers, vulnerable to foreign subsidies,” he concluded. “Rewarding bad actors by weakening U.S. competitiveness is a foolish idea.”