These new projections are even significantly below the jaw-dropping declines forecast earlier in the year that farm income would drop by 32%, from $108 billion last year to $73.5 billion in 2015.  This drop alone was sufficient to send shockwaves across the agricultural sector with even iconic companies like John Deere announcing lay-offs of employees. 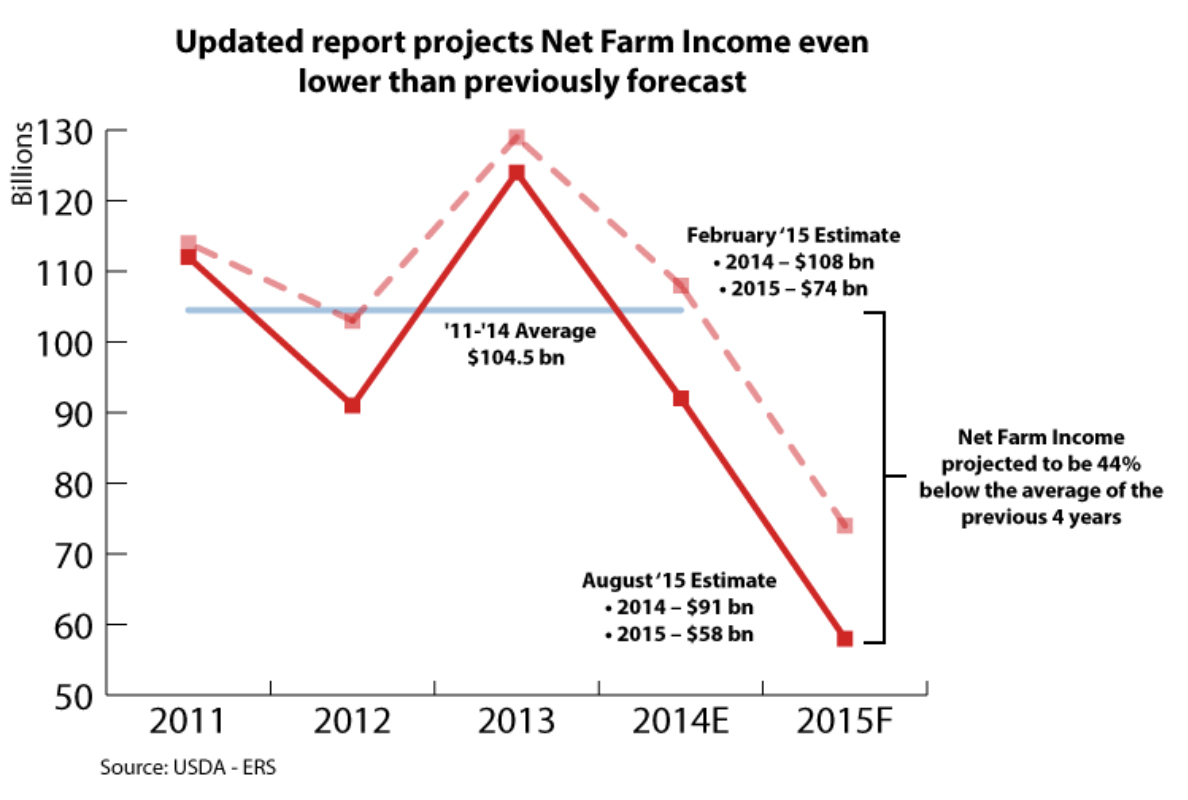 But a careful inspection of the numbers reveals the problem is even worse.

In short, USDA forecasts that when all is said and done, American farmers will have a combined farm income that is less than half of what it was just two years ago.

This alone is staggering. But it may well mark just the beginning of a depressed farm economy the effects of which may very well adversely impact the entire sector and cascade across other sectors of our economy. As was experienced in the farm financial crises in the mid-1980s and late 1990s, and the boom that began in the early 2000s, the farm economy can douse or drive the overall economy.

And, whether you compare this year’s farm income to 2013, which marks a 53% drop, or against the previous 4 years, marking a 44% drop, a point to bear in mind is this is a national average, meaning many farm families are in even greater straights.  Nonetheless, either average paints a bleak picture.  Few of us would want to come home with the news that our family budget has just been cut in half.

Even in an extraordinarily risky business as farming, where unpredictable weather and foreign subsidies, tariffs, and other protections wreak havoc on production and prices, a plunge in prices of this magnitude is rare.  One would have to go back 32 years to find anything close to analogous and, even then, 1983 – a harbinger of the 1980s farm financial crisis that was yet to come – reported a 39% drop in farm income compared to the previous four years, coming up short compared to the forecast drop for 2015.

While many readers may not recall the 1980s farm financial crisis, thousands of farm families were forced to leave the farm during this period, whole rural communities were shuttered, the effects were felt in even the largest of cities, and President Ronald Reagan signed into law the largest Farm Bill in history in order to staunch the bleeding.

Given the current farm income projections, the metal of the 2014 Farm Bill may well be tested. The 2014 law, which was designed to save taxpayers some $23 billion, achieved these savings primarily through cuts to the commodity title, the purpose of which is to provide producers some of the tools necessary to manage the kind of collapse in prices that farmers are now experiencing. Crop insurance, one of two pillars of sound U.S. farm policy, is also shrinking due to the drop in prices as the lower crop prices have translated into lower insurance protection because market prices help determine that protection level.

But, even as prices, income, and insurance protection have sharply declined for farmers, their production costs have actually gone up, with the costs of seed, fertilizer, tractors, other equipment, and labor up 10 percent compared to the previous 4-year average.

Without a doubt, 2015 is going to be a very difficult year on the farm. How long these conditions last is uncertain, but we should all hope for a quick turn-around. It is hard to measure all the good that hard-working farm families do, but we know for our nation to prosper we must stand beside this foundational sector of our culture and economy.