The Forum
By: Kelly Erickson 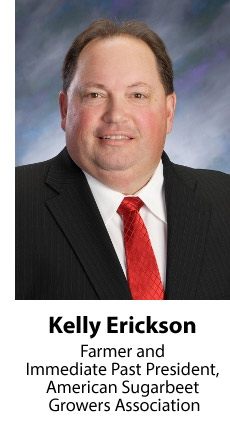 For example, the belief that farmers get paid for not growing; or that benefits just go to big agribusinesses; or that farm spending is out of control. Such criticisms make splashy headlines but are no longer relevant thanks to the significant evolution of farm policy over the past 20 years. Over that time, government control of agriculture has given way to a system where farmers take more responsibility, make decisions based on market forces, and are asked to help fund their own safety net.

The most significant reforms occurred in the 2014 farm bill, which is projected to reduce farm spending by billions over the next decade.

The farm bill repealed direct payments – checks that some farmers received every year no matter the market conditions or how crops fared. In their place are crop insurance policies made available to all growers regardless of size, geographic location or cropping decision.

With crop insurance, most farmers get bills in the mail instead of government checks, and because producers are now paying more of the farm policy tab, spending has trended downward over the years (to less than three-tenths of 1 percent of the federal budget).

Here’s how it plays out on my sugar beet, soybeans and wheat farm.

Every year, I analyze input costs, market prices and yield trends. Then I purchase crop insurance tailored to the unique risks on my farm.

Most years, my crops succeed and no insurance check is collected, meaning insurance companies and the government keep my premiums to offset other policy costs.

In disaster years when we suffer from drought, frost, flood, hail or a host of other calamities, insurance only kicks in after I’ve shouldered a sizable deductible, meaning I share the cost of aid.

Collectively, farmers spend about $4 billion out of their own pockets every year to buy insurance. They do this because the government ensures policies are affordable and widely available and because an efficient infrastructure maintained by the private sector speeds assistance to us much faster than old government disaster programs, which were 100 percent taxpayer-funded.

Crop insurance is just part of my story. Our farmer-owned cooperative also takes out government-backed operating loans on our sugar crop. These loans help cash flow the operation as the sugar is sold over the course of the year, and, like any other business loan, it is repaid with interest.

As a result, sugar policy typically operates at no taxpayer expense and is projected by the U.S. Department of Agriculture to cost $0 over the next decade.

Admittedly, agriculture’s transition to lower costs isn’t fast enough for some detractors. But, as a farm leader involved in the 2014 farm bill debate, I can attest that tremendous headway has been made, and I know that it is vital to remove remaining stumbling blocks to further reform.

For example, unnecessary environmental regulations on agriculture breed bureaucratic inefficiencies, drive up costs of production and make it difficult to compete.

And, while U.S. farm supports are getting smaller, foreign subsidies are rapidly increasing abroad and distorting global markets.

In the case of sugar, foreign subsidies have created the most volatile commodity market in the world, where global prices currently cover just half the cost of producing the crop. In other words, exporters would lose 50 cents for every $1 worth of sugar sold if it weren’t for subsidies propping them up.

Putting an end to the domestic and foreign policies that stifle U.S. agriculture’s competitiveness should take top priority in the years ahead as the current farm bill is implemented.

And as we wage that fight, taxpayers can take comfort in the fact that they are shouldering less risk and that U.S. farm policy is headed in the right direction.

Erickson is immediate past president, American Sugarbeet Growers Association, and farms with his son near Hallock, Minn.