We can forgive American farmers if they’ve decided to skip reading the daily newspaper. It seems the news keeps getting worse and these farmers don’t need to read about it because they’re living it.

Monday’s Wall Street Journal headline read, “Strong Dollar Shreds Wheat Exports: Farmers already contending with price slump for agricultural commodities are dealt a double whammy.” The story highlighted that U.S. agricultural exports are expected to be down across the board and our foreign competitors – whose farmers receive far more support than American farmers – will benefit.

Another headline two weeks earlier read, “Farm Income Forecast Dips Again.” This story highlighted the U.S. Department of Agriculture’s (USDA) new prediction that farm profitability will decline more than expected for the second year in a row. Net farm income is expected to drop more than 38 percent from $91 billion to $55.9 billion for the year. The 2014 number was already down 26.4 percent from $123.7 billion in 2013. This means that 2015 marks a crushing 55 percent decline in net farm income since two years ago and a 47 percent decline relative to the previous four-year average.

As Chris Hart, an agricultural economist from Purdue University, described it in the WSJ article, “It is not just a breeze blowing against U.S. agriculture, it’s a gale-force wind.”

These are not just macro numbers left to be debated by economists and pundits. This is a very distressing reality that is confronting farm families all over the country. These numbers hit them square in the gut.Farmers spend over $400 billion annually to grow crops that allow American families to spend less of their disposable income on food than families in other nations. But one has to question how long this can last and if adjustments will need to be made?

For cotton the situation is much worse as USDA estimates it costs $813.03 per acre, so even if yields were 1000 pounds to the acre nationally with $.65 per pound price, the farmer would still be losing $163 per acre.

On top of grim economic news, farmers also have to contend with the relentless critics of agriculture policy and modern farming. The loudest opponents seem to be tenured, university professor-types who are secure in their salaries and ivory towers. Devoid of reason and defying any kind of common sense, they continue to perpetuate dishonest tales about the cost, mechanics and purpose of U.S. farm policy. Worse, they recruit policymakers in Washington to join the effort to undermine the farm safety net.

They would have you believe that chipping away at our investment in farm policy makes for good fiscal policy. It doesn’t. The fact is farm policy spending was never a large pot of money and it’s even smaller today. The 2014 Farm Bill made risk management the focus so assistance only triggers during downturns. It provides a bit of cushion for farm families, but it is very small in comparison to the losses they absorb.

Nowhere is this better illustrated than USDA’s most recent chart on government farm program payments to producers. Despite a sour economy that triggered the farm bill safety net for some crops, overall spending is historically low. Further, an uptick in the economy shuts off payments altogether. 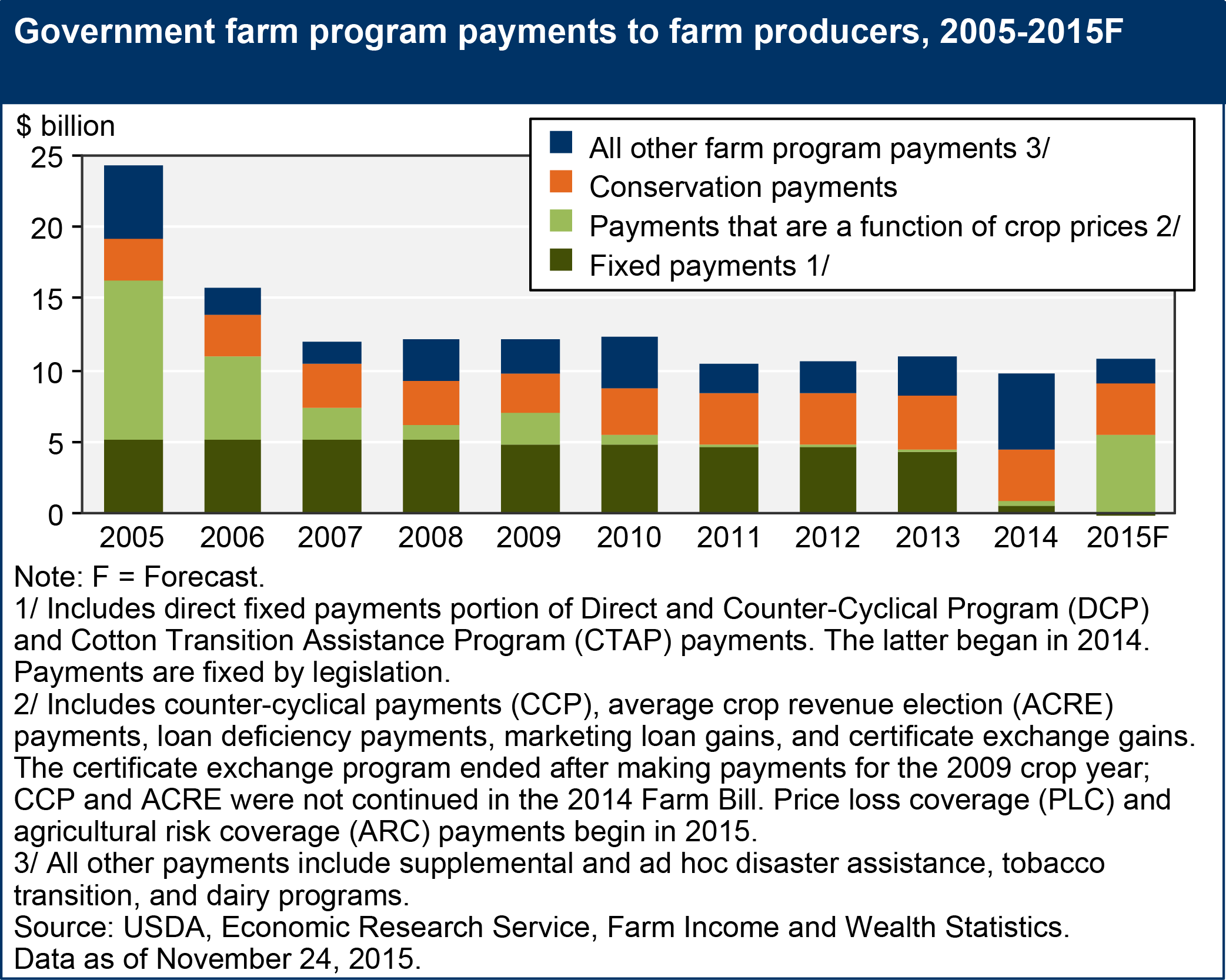 Now there’s a headline we never see: American farmers are doing more with less while contending with collapsing prices, regulatory requirements, the threat of arbitrary cuts to the farm safety net in Congress, and competing with foreign treasuries who violate rules under the World Trade Organization. Or, Farm Bill works as intended, helps farmers get over slump, helps consumers enjoy a stable, affordable food supply.