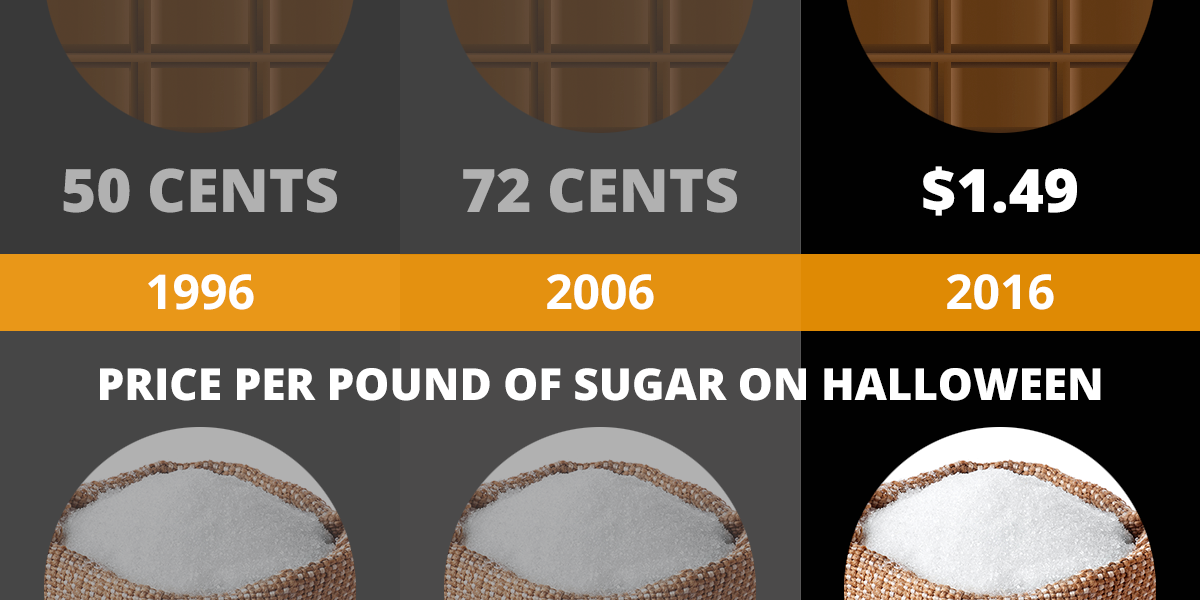 Halloween is big business these days.

Americans are expected to spend an all-time high $2.7 billion this year on Halloween candy alone. That’s $550 million more than was spent on chocolate bars, candy corn, and malt balls just 10 years ago.

In fairness, this increase doesn’t mean that people are buying a lot more candy. It simply means that the candy people are buying costs more. So, how much of this record-setting revenue will be flowing to the sugar farmers that made the sweet treats possible?

Sadly, very little. In fact, they could be making less when you consider that sugar prices are lower today than they were a decade ago…and the decade before that.

The Americans Sugar Alliance posted an infographic to its Facebook page last week to point out the farmers’ shrinking share of the Halloween candy sack.

And the response has been tremendous. The sugar producers’ social media post has been shared more than 500 times, reaching nearly 90,000 people.

That kind of attention is good for agriculture, but we must not lose sight of the fact that farmers’ shrinking share of the pie is a 365-day thing, not just a Halloween trick. And it’s not isolated to sugar either.

Commodity prices are down across the board, which has taken a big bite out of the rural economy.

Each month, Creighton University put out an economic measurement of rural America, known as the Rural Mainstreet Index. It assesses growth on a scale of 0 to 100 (numbers below 50 represent economic contraction and numbers above represent strengthening conditions).

In October, Creighton assigned an overall rural economy index on 31.8, which is down from 37.3 in September and represents the lowest reading taken since April 2009. It was also the 14th straight month that the index fell below growth neutral.

In addition, Creighton’s study noted weak farmland and ranchland prices, with October’s index falling to 25.0 – down from September’s 40.3. The October farm equipment-sales index likewise sank to 13.1 from 14.3 the month before.

In other words, times are tough in rural America right now, even if consumers aren’t seeing it in their local grocery store. And things are not trending in a positive direction for farmers and ranchers, which is exactly why it is so important to have a strong farm policy in place.

Without it, America could start losing some of its hardworking farm families, which would be scary indeed.