Editor’s note: Farm Policy Facts is pleased to publish a guest editorial from U.S. Representative Dan Benishek of Michigan that describes the importance of a strong farm economy to the country. Rep. Benishek is a member of the House Committee on Agriculture and we applaud his efforts to ensure farmers have a voice in Washington.

It wasn’t that long ago that the majority of our nation’s workforce was directly involved in agriculture. Today, less than one percent of the American population call themselves farmers. Through advances in technology and mechanization, these remaining farmers make all the food that feeds not only our country, but also much of the world. That is why it is so important to understand the challenges farmers face in the 21st century economy. 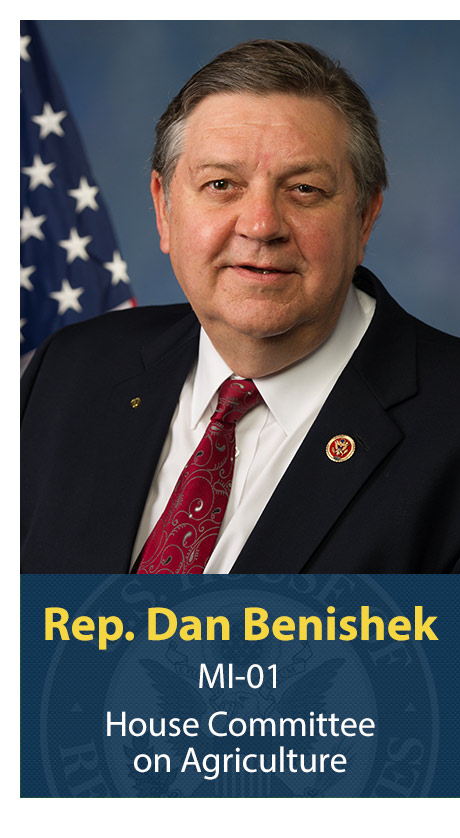 In Northern Michigan, which I represent in Congress, we have over 7,000 small farms that directly employ more than 11,000 people, not including the thousands of jobs created off the farm thanks to the work these families do each and every day. Agriculture is a vital part of our economy, providing good-paying work to many Michigan families. However, instead of working to find ways to strengthen our rural communities and lighten the regulatory load, some in Washington are busy making it harder for them to operate. It is clear that our farmers must have their voices heard.

That’s why I recently held a Farming for Jobs tour across my District. I wanted to hear directly from those who are working in the fields so that I can better represent them and serve their needs. In Congress, I am a member of the House Committee on Agriculture where almost all of our nation’s agriculture policy begins. This tour provided an opportunity for me learn more from those who know the most about how to keep a farm functioning and profitable.

Along the way, I met many good people who were working hard to put food on our tables. In Iron County, I stopped by the Johnson Potato farm, a family-owned operation that has been growing potatoes for generations. Then I visited with Jim Countrymen and his wife Agnes who raise cattle and hogs in the Upper Peninsula. The U.S. Department of Agriculture’s (USDA) assistance is critical to farmers like Jim and Agnes because harsh winters in Michigan can result in the unexpected loss of cattle, especially during calving season. These losses can add up and put a severe financial strain on producers and that is why the House Committee on Agriculture worked hard to renew lapsed livestock assistance in the 2014 Farm Bill. Later, I met with Brenda Turrenen who raises nearly 2,000 hogs on her farm in Baraga County. For her, farming is an opportunity to create jobs in the community and grow her own business in an area where unemployment is far above the national average.

As I met with these hard-working farmers in my district, a couple of things became very clear. First, many people in Washington are unaware of how labor-intensive and capital-intensive farming is. Farmers can’t afford more regulations and red tape from government agencies like the Environmental Protection Agency (EPA). Second, farms are the backbone of our economy and country.

In Congress, I am committed to ensuring that the voices of our farmers are heard. I have worked to repeal the absurd but no less dangerous “Waters of the U.S.” rule that would allow the EPA to regulate ditches. I have also worked to repeal the Country of Origin (COOL) labeling law that would result in devastating tariffs on cattle, hog, and poultry producers as well as producers of other products made in our country.

Rep. Dan Benishek represents the 1st District of Michigan and serves on the House Committee on Agriculture.