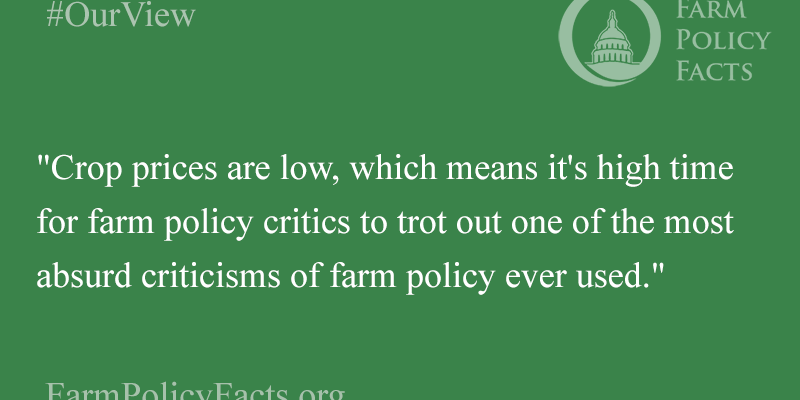 As Farm Policy Facts pointed out earlier, their laughable argument goes something like this: Farm policy makes food so cheap that Americans just can’t help themselves, and they eat until they are obese. If we subsidized fruits and vegetables, then Americans would be healthier.

Anyone with an ounce of common sense is probably shaking his or her head right about now.

First of all, the commodities being attacked – corn, soybeans, wheat, rice, oats, barley, meat, dairy and eggs – are not unhealthy. Quite the opposite. In fact, as the U.S. Department of Agriculture (USDA) suggests, it’s most important that all foods be consumed in moderation and as part of a balanced diet.

Second, fruits and vegetables do receive federal support. One of the common refrains of then-House Agriculture Committee Chairman Frank Lucas during the reauthorization of the 2014 Farm Bill was that it had to “work for all crops in all regions of the country.” Farm policy is near equitable between crops and regions, which is why the latest farm bill passed with big margins in both the House and Senate and was signed into law by President Obama.

Third, while farmers may be receiving less for their crops, the cost of food at the grocery store is not declining, so shoppers aren’t getting spoiled with free junk food. In fact, food prices usually increase regardless of ingredient costs.

Last, but certainly not least, price is not the biggest hurdle to getting Americans to eat fewer potato chips and more asparagus. It’s more a function of taste preference than it is affordability or availability.

For example, a five-year-old may turn his nose up at spinach, no matter how much his parents and Popeye cheer its consumption. That spinach is both available (it’s on the plate in front of the kid) and affordable (mom and dad bought it), but that doesn’t make it irresistible.

Common sense aside, farm policy’s opponents are still determined to use this twisted logic to rip a hole in the safety net helping hold the rural economy together right now. And they got some encouragement from a new study that looked at obesity and its alleged correlation to foods produced with commodity crops that benefit from farm policy.

Of course, that study had a lot of flaws as Farm Policy Facts has previously noted. First and foremost, it only looked at eating habits from 2001 to 2006. In other words, the data is at least a decade old and not reflective of big changes in food consumption patterns through the years. Not to mention, it didn’t capture the big changes to U.S. farm policy since it only examined one title of the 1973 Farm Bill. That’s right, 1973?!

Even the author of the study, Karen Siegel, admitted to Reuters that federal support for commodity crops couldn’t be linked to unhealthy eating:

The study itself can’t prove that a diet higher in subsidized foods causes poor health, Siegel said. But foods that are high in fat, sugar and sodium are known to increase the risk for chronic health problems, particularly when paired with other factors such as smoking and inactivity, she added.

Put another way: All the old data I looked at show that you may have health problems if you have a poor diet, smoke and don’t exercise. Duh.

You’d probably have health problems if you ate fruits and vegetables at every meal then chain smoked while watching television in your pajamas all day, too.

Unfortunately, that didn’t stop people like the professional critics at the Environmental Working Group (EWG) from making a Whopper out of this nothing burger. “A new study shows that bloated crop subsidies may be contributing to Americans’ expanding waistlines and poor health,” they proclaimed.

And it didn’t stop some reporters with predetermined narratives from taking EWG’s bait and writing things like, “‘Specialty crop farmers,’ as they’re called by the USDA, are not eligible for the federal subsidy and crop insurance program.”

That’s a big fat lie. And just like this latest attack on the men and women who feed and clothe the world, it doesn’t pass the laugh test.

For more details on the flaws of this new study, click here.