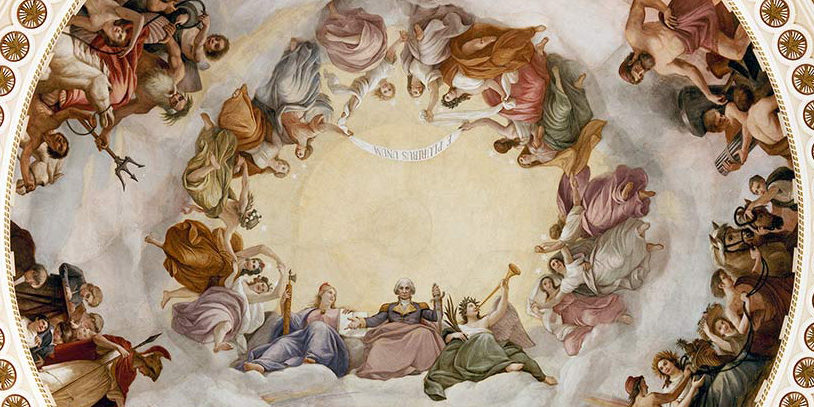 It is the season of summer trips and for many that includes a journey to Washington, D.C., especially this weekend to celebrate Independence Day in our nation’s capital and visit some of America’s notable landmarks and monuments.

An astute observer will notice that, peppered throughout the city, there are subtle reminders of how much the Founders and other leaders of our nation valued and appreciated agriculture.

Take for instance, the Apotheosis of Washington in the rotunda of the U.S. Capitol’s dome – arguably one of the most recognizable American symbols. Constantino Brumidi painted this famous fresco in the center of the new dome after it was completed in 1866. It is a dedication to George Washington, our first president who also happened to grow up on a farm and returned to working the land at Mount Vernon when he stepped down as president.

According to the Architect of the Capitol, the fresco depicts Washington “rising to the heavens in glory, flanked by female figures representing Liberty and Victory/Fame. A rainbow arches at his feet, and thirteen maidens symbolizing the original states flank the three central figures.” Yet, surrounding the image are six central figures representing American life, enterprise, and culture. One of those figures is Ceres, the Roman goddess of agriculture, sitting on a McCormick mechanical reaper demonstrating that innovation and the ability to produce food and fiber is critical to the success of a thriving nation.

Farther afield in one of the corridors of the Capitol building there is a quote inscribed on one of the walls from another farm kid and renown public servant, Daniel Webster. It reads, “When tillage begins other arts follow. The farmers, therefore, are the founders of human civilization.”

Outside above the portico of columns on the East Front of the U.S. Capitol there is the Apotheosis of Democracy pediment that depicts agriculture as one of two great sources of wealth with the other being industry.

Arrive by train to Washington’s historic Union Station and one will notice on its façade this inscription, “The farm – best home of the family, main source of national wealth, foundation of civilized society, the natural providence.”

Additionally, some of the largest and well-known monuments in Washington, D.C. are of Presidents Thomas Jefferson and Abraham Lincoln. It was Jefferson who wrote, “Agriculture is our wisest pursuit.” It was Lincoln who said agriculture was “the largest interest of the nation” and later signed into law a Congressional act creating the Department of Agriculture and another that established the creation of land grant universities to advance agriculture education.

All of this is to highlight the enduring value of American agriculture and its importance to the progress and success of our nation.

These historical symbols – though subtle – are placed alongside larger monuments to liberty for a reason. Independence and freedom from a tyrant-king would not have been possible if the new nation had not been able to feed and clothe its citizens.

Today we take this fact for granted, but let us be reminded of our roots on this Independence Day. Agriculture continues to be a source of national wealth, an integral part of national security, the foundation of civilized society, and the pride of American families.