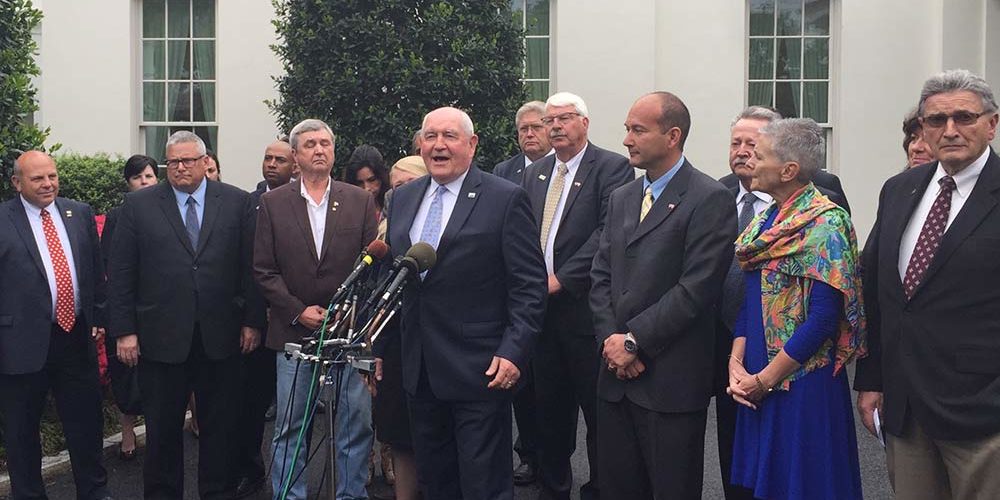 Just hours after being sworn in as the 31st Secretary of Agriculture, Sonny Perdue had his first assignment before him: lead a new interagency task force on agriculture and rural prosperity. This group will examine how the federal government can lighten the regulatory burden on agricultural producers, expand trade markets for U.S. products, and accelerate investment in rural America.

“President Trump has made it clear that addressing the needs of rural America will be a top priority, and the message that we want to send to the agriculture community is that we are here, we are working hard, and we are on their side,” stated Perdue.

Trump signed the executive order establishing the new initiative after hosting a roundtable with 14 farmers from across the country to hear about the challenges they are facing and how this new initiative would help mitigate them.

“Our farmers deserve a government that serves their interest and empowers them to do the hard work that they love to do so much,” explained Trump.

Trade in particular received top billing for topics discussed as the president announced plans to impose a new tariff on Canadian lumber imports and criticized Canada’s dairy pricing system, which has locked out U.S. dairy exports.

In a press conference afterwards, Perdue said the actions sent a signal to Canada and other countries that “we need to play fair.” And, Hank Choate, a dairy farmer from Michigan further described the domestic pricing changes as a way for Canada to work “underhandedly.”

“If the secretary and the president doesn’t get a handle on that, other countries that we work with and trade with will look for ways to work underhandedly as well,” commented Choate.

Free and fair trade has been a specific interest of Farm Policy Facts. Although there is a need to maintain and expand markets abroad for U.S. products, there is also a need to ensure everyone is playing by the rules, especially when it comes to agriculture. We have highlighted several examples where foreign competitors are reneging on agreements made in the World Trade Organization (WTO) thereby putting American farmers and ranchers at a competitive disadvantage. Additionally, we have made the case that this is another pressing reason why we need an on-time farm bill reauthorization when the current one expires.

Perdue offered up assurances that expanding opportunities in trade would be a priority for him and this administration, as well as enforcement of existing and future trade agreements.

“The blessings of America is that we’re so productive, America’s farmers and ranchers have been so productive over the years that we have an abundance that we need to sell,” stated Perdue. “It’s going to be my task to go around the world with [Commerce] Secretary Ross, our U.S. trade representative, and our undersecretary of trade to make sure American products are on the tables all over this world.”

Editor’s Note: Farm Policy Facts was pleased to be credentialed by the White House to cover the event with Secretary Sonny Perdue for our readers.